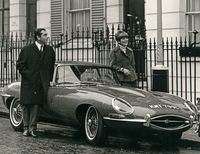 – An Exhibit in the Museum for Film and Television

Ken Adam is a German-British film production designer most famous for his set designs for the James Bond films of the 1960s and 1970s. Born Klaus Hugo Adam in Berlin in 1921, he watched the Reichstag burn as a child and soon fled with his family to England. Following a successful career in the Royal Air Force, he became a draughtsman and then a production designer, making his name with the futuristic Bond sets and the famous war room set from Stanley Kubrick’s Dr. Strangelove.

Adam was naturalized as a British citizen, and was awarded the OBE for services to the film industry.

In September 2012, Sir Ken Adam handed over his entire body of work to the Deutsche Kinemathek, which will make the collection accessible in an online inventory in summer 2015. The collection comprises approximately 4,000 sketches for films from all periods, photo albums to individual films, storyboards of his employees, memorabilia, military medals and identity documents as well as all cinematic awards, including Adam’s two Academy Awards (for Barry Lyndon and The Madness of King George). Now the Kinemathek is featuring Adam’s work in an exhibit running through May 17.