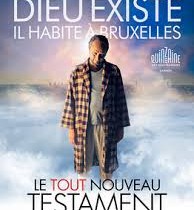 God’s alive and doing rather poorly in Brussels.

The Belgian film academy’s awards are called the “Magrittes,” and tellingly enough, wacky surrealist visionary Jaco Van Dormael has scooped up a raft of them. Van Dormael takes his time making movies, but they’re always worth the wait. His debut film Toto the Hero (1991) was ten years in the making and won the Golden Camera at Cannes. Mr. Nobody, a sci-fi cult hit in English, took him six years and received a ten-minute standing ovation when it screened at the Venice Film Festival in 2009.

The Brand New Testament (Le tout nouveau testament) is Van Dormael’s brand new movie, and it’s taken since 2010 to make. Belgium’s entry for best foreign-language film at the 2016 Academy Awards, it too is bound to attract a passionate following. Testament is a hugely ambitious and colorful film that has God alive, but not so well, and living in a soulless high-rise in Brussels. (E.U. functionaries, take note.) This God (Benoît Poelvoorde) is a mean-spirited bastard who created humans as his playthings and delights in seeing them struggle and fail. He abuses his bug-eyed Hausfrau of a wife and spends his time boozing in his tatty bathrobe, gleefully working out new disasters with which to plague mankind. Fortunately for us, his fearless preteen daughter Ea (Pili Groyne) is the optimistic narrator of the story. Ea breaks free from God’s clutches and, on the advice of her brother J.C., sets out to find six new Apostles. Using her own talents, which include her wonderful ability to hear people’s inner music, she brings unhappy modern humans together and opens their eyes to the beauty of life. The film is divided into “Gospels” in which each of Ea’s new recruits learns to examine the world from brand new, innocent perspectives. Van Dormael’s absurdist imagery is wildly entertaining, though some will find its entire premise blasphemous. Which is, of course, the point.

Jaco Van Dormael tells us that if we humans, like Ea’s new Apostles, refute our wrathful gods and look for love in whatever unlikely place we can find it, we will be more likely to achieve a wistful state of happiness — and possibly even outright joy. Van Dormael is a more philosophical but similarly imaginative version of Wes Anderson, and The Brand New Testament is a triumph of cinematography (thank you, Christophe Beaucarne). And where else can you see Catherine Deneuve in bed with a gorilla?