I translated Rudolf Arnheim’s classic text for the Wisconsin Studies in Film series at the University of Wisconsin Press.

It was my great good fortune to work closely with Mr. Arnheim on the translation. Here’s a link to Wisconsin professor David Bordwell’s tribute to Rudolf Arnheim, who passed away in 2007 at 102. 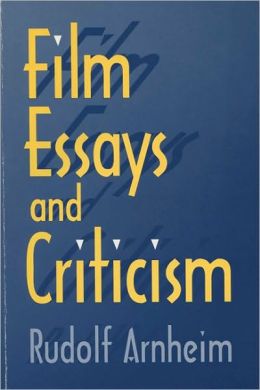 One of the world’s leading film theorists, Rudolf Arnheim has been well known to readers of English since the publication of his classic Film as Art in 1957. This is the first English translation by Brenda Benthien of another of his important books, Kritiken und Aufsätze zum Film, which collects both film reviews and theoretical essays, most of them written between 1925 and 1940.

As a young man in 1920s Berlin, Arnheim began writing about film for the satirical magazine Das Stachelschwein. In 1928, as the Weimar Republic began to crumble, he joined the intellectual weekly Die Weltbühne as  film critic and assistant editor for cultural affairs. His most important contributions to both magazines are published here, including witty and incisive comments on many of the great classics of the silent and early sound period, such as Buster Keaton’s The General and Fritz Lang’s Metropolis. With the advent of Nazism in Germany, Arnheim emigrated first to Italy, where he wrote essays (many included here) for a nascent Enciclopedia del Cinema, and then to England and the United States.

The thirty essays on film theory discuss elements of theory and technique, early sound film, production, style and content, and the relationship of film and the state. The fifty-six critical pieces include Arnheim’s thoughts on the practice of film criticism, his reviews of German, American, French, and Soviet films, and his profiles of Greta Garbo, Charlie Chaplin, Felix Bressart, Erich von Stroheim, and others. Also included in the volume are an introduction (newly revised by Arnheim) and a comprehensive bibliography.

“This collection gathers some of the most distinguished film criticism ever written. It is a significant resource for the study of classical German cinema as well as an impassioned defense of silent film art in general. Arnheim’s work will also be seen as part of a larger dialogue about film’s formative, expressive, and political potential during a time of social crisis.”