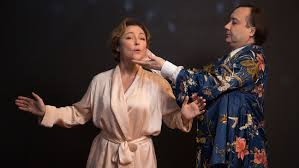 Poor Marguerite. She’s a middle-aged baroness in a loveless marriage, living in a lavish country seat outside Paris in 1920. If she were satisfied attending ladies’ teas and concerts in aid of war veterans, her life would be so simple. But then she wouldn’t be Marguerite. Convinced that she was born to the stage, and that her voice is a gift bestowed upon her by the heavens, Marguerite organizes private concerts in her salon. Adorned in feathers and furs, like her beloved, ill-fated opera heroines, she presents her Art to assembled aristocratic devotees. Yet most unfortunately, Marguerite possesses the most spectacularly awful voice known to man, her screeches rivaled only by the peacocks calling to her from the estate grounds. Everybody but Marguerite is in on the joke. Not a soul dares mention her vocal disability, out of hypocrisy or cowardice. Her opera fantasy is enabled by her employees, her embarrassed husband, and the social circles who benefit from her largesse.

A pair of young scalawags scales the estate’s wall, to crash a performance and confirm rumors that the Baroness is in fact tone-deaf. Brash, arrogant members of Paris’s left-wing intellectual art circles, they determine to use Marguerite’s cheerful good will – and money – to their advantage. A glorious scene takes place when Marguerite agrees to support her new young friends by appearing in their literary cabaret. Lured to the show under false pretenses (an appearance by Charlie Chaplin has been advertised), the audience is subjected to a kind of Dadaist-Expressionist performance of anarchic poems and anti-Republican diatribes. Then Marguerite appears as in a vision, dressed in white like Marianne, the symbol of the French Republic. She squawks the Marseillaise; the public is outraged; chaos ensues.

Marguerite is portrayed as a lonely woman who seeks to restore her apathetic husband’s lost affection. Yet in refusing to acknowledge her lack of traditional artistry, she gains power, in effect becoming an early performance artist. The question remains whether she’s aware of her insufficient talent, or whether she’s getting what she needs out of her slavish and illogical devotion to singing.

The film’s sets and costumes are suitably elegant, and Catherine Frot is charming and vulnerable as Marguerite. Outstanding performances include those by Michel Fau as Madame’s outlandish, has-been vocal coach, and Denis Mpunga as her perhaps too-faithful butler. Unfortunately, the film loses a bit of steam and would benefit from being half an hour shorter.

Marguerite is based loosely on the life of an early 20th-century New Yorker. Florence Foster Jenkins was a very rich woman, embarrassingly passionate about art and opera, and apparently completely unaware that her voice was so bad. Fortunately for the makers of Marguerite, their film arrives in theaters months before an English one based on the life of the same woman. Florence Foster Jenkins, directed by Stephen Frears and featuring Meryl Streep and Hugh Grant, is sure to provide a different – and potentially more comical – take on the subject matter.

Contemporary critics sometimes described Madame’s performances in a snootily ambiguous way that aimed to pique public curiosity: “Her singing at its finest suggests the untrammeled swoop of some great bird.” To which she was known to reply, “People may say I can’t sing, but no one can ever say I didn’t sing.”