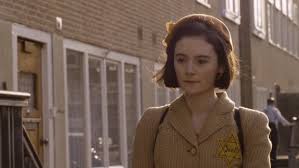 The Diary of Anne Frank

Why another film based on the diary of Anne Frank? Everybody knows the story. It’s already been made into a well-meaning play and a number of TV movies. Lines of tourist-pilgrims still wind around the block to enter the Anne Frank House in Amsterdam, where she and her Jewish family hid from the Nazis from 1942 to 1944. And it’s been 70 years since Anne died in a concentration camp in Bergen-Belsen.

Yet this is the first time a film about Anne has been made in German, the Franks’ native language. Producers M. Walid Nakschbandi and Michael Souvignier, director Hans Steinbichler, and screenwriter Fred Breinersdorfer had access to the archives of the Anne Frank Fonds, founded by Anne’s father Otto after his family’s deaths. Filmmakers and Fonds agreed on a fresh approach to Anne’s story that would make it accessible to a new generation.

“Someday this horrible war will be over, someday we’ll be people again and not just Jews,” Anne wrote. Yet long after the Second World War, ethnic and religious persecution, war, civilian murder, totalitarianism and dehumanization are still the order of the day. Europe is again confronted with countless human tragedies caused by migration. Anne Frank’s diary opens the door to many contemporary themes, especially regarding equality, emancipation, and the protection of minorities.

Das Tagebuch der Anne Frank is a beautifully crafted film that lifts the girl down off her pedestal and makes her flesh and blood. It reminds us that Anne was a regular teenager who fought with her mother and Mrs. van Daan, who was curious about her changing body, and who developed a crush on Peter. At the same time, the film makes palpable the daily terrors of hiding from persecutors. The loss of human dignity in cramped living conditions is portrayed in wrenching detail. Kudos to set designer Volker Schaefer and costume designer Katharina Ost, who make the 1940s come vividly to life. In addition, the filmmakers unexpectedly open up the story beyond Anne’s diary. Her childhood memories of carefree days in the Alps help sustain her during her confinement in the attic. Wrenchingly, the film also follows the family into the camp after their arrest.

In 1944, Anne Frank heard a radio address by Minister for Education, Art and Science Gerrit Bokestein, calling on the Dutch people to retain their diaries and other texts from the occupation, so their descendants might fathom what they were going through. Anne was inspired to rework her diary, hoping to publish it in the form of a novel when the war was over. Bearing in mind that her book would be read by strangers, and having matured two years in hiding, she began to edit it, eliminating intimate observations about her physical changes, as well as her childishly harsh criticism of her mother. At the time of her arrest, she was writing about eleven pages a day. In considering what readers might think about her, Anne was not so different from the legions of modern girls who share information about themselves online. Lea van Acken, the film’s superb 16-year-old lead actress, has said that after she researched Anne and got to know her a bit better, she started writing letters to her. In sharing school gossip and telling Anne about things that made her mad, Lea was writing from one teenage girl to another.

The range of responses to Anne’s story has ranged from the sublime to the ridiculous. In her foreword to the diary’s 1952 U.S. publication, Eleanor Roosevelt called it “One of the wisest and most moving commentaries on war and its impact on human beings that I have ever read.” And then there was the 1959 Hollywood movie version, starring 21-year-old Millie Perkins. Its trailer boasted, “Here is the thrill of her first kiss! Here is the wonder of her youth! The excitement of her first love! The miracle of her laughter!” Though an effort was no doubt being made to attract a wide, “modern” audience to Anne’s distressing story, Hollywood’s tone (surprise!) was off the mark.

Let’s let Anne have the last word. “It’s really a wonder that I haven’t dropped all my ideals, because they seem so absurd and impossible to carry out. Yet I keep them, because in spite of everything I still believe that people are really good at heart.”

These are some of the reasons for this new, wonderful film about Anne Frank. Here’s hoping it will make it to English-language theaters too.