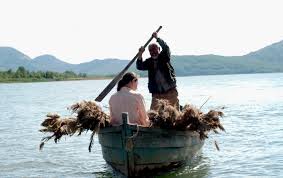 During the annual spring torrent, the Enguri River washes soil from the Caucasus to the Black Sea, creating tiny islands in its wake. It’s a place of pristine beauty – until gun shots ring out. For this is the site of ethnic strife between Georgians and Abkhazians, who claim independence. Symbolic perhaps of his people’s resistance, an old Abkhaz man (veteran Turkish actor Ilyas Salman) paddles up to a tiny island in the river, then slowly and painstakingly builds up a wood dwelling by hand. One day he brings his teenaged granddaughter, who obediently helps him work the soil. Not given to displays of emotion – or even conversation – they toil through the seasons, planting corn to earn their livelihood. The tranquility is sporadically disturbed by shooting on shore. As soldiers motor by on patrol, Grandpa insists that the land belongs only to its creator.

Ruminative and philosophical, Corn Island reminds us that all man’s endeavors are finally subject to the vicissitudes of nature. Director George Ovashvili graduated from the film department of the Georgian State Institute of Cinema and Theatre and studied at The New York Film Academy at Universal Studios in Hollywood.