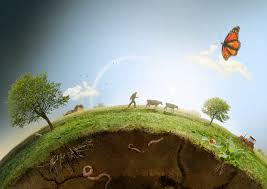 Niels Stokholm is not just your run-of-the-mill Danish organic farmer. The 80-year-old proprietor of the Thorshøjgaard farm north of Copenhagen is part agriculturalist, part scientist, part cow whisperer and part mystic – and perhaps one of the last idealists in Denmark. Niels adheres to guiding principles of biodynamic agriculture, a method of organic farming developed by Rudolf Steiner that employs what proponents describe as “a holistic understanding of agricultural processes.” This method of sustainable agriculture treats soil and livestock care as ecologically interrelated tasks and uses manure and compost rather than artificial chemicals. The emphasis is on local production and distribution systems; sowing and planting are based on an astrological calendar.

Since 1975, Niels has been farming the Red Danish Dairy Breed of cows with the utmost patience and care, according to traditions rather than modern guidelines on organic farming. His insistence on tending his herd gently and according to their instinctual needs gets him into hot water with licensing authorities and agricultural inspectors. Yet his milk, vegetable and beef products are so outstanding that they are sought after, and served by, the best restaurants in the world, first and foremost by NOMA in Copenhagen.

Without the assistance of many volunteers, Niels and his wife Rita would be unable to keep up their farm according to their standards. Not everyone understands Niels’ ideas about collective consciousness and the spiritual force of the universe. Fortunately, school groups come often to live and work there, providing hope that age-old farming traditions will have a future. Niels is as gentle with his explanations to the youngsters as he is patient with his herd of cows. It’s the adult humans, with their bossiness and lack of understanding, who really get his dander up.

Danish director Phie Ambo first encountered Niels and Rita when she visited Thorshøjgaard with her children. Sharing his fondness for nature and his awe at the minutiae of existence, Phie is convinced that his pre-industrial form of agriculture is destined to be the wave of tomorrow. Kudos to her and fellow cinematographer Maggie Olkuska for opening our eyes to Niels’ world of wonder. The soundtrack is heightened by the mystical vocals of Theatre of Voices.

Published in Cinema Scandinavia and KinoCritics